We all know stormwater treatment wetlands are a leading nature-based solution for managing stormwater and protecting waterways – but could they also play a role in our net zero carbon journey?

The benefits of these systems for flood mitigation, protecting receiving environments, enhancing urban amenity and biodiversity are well-established. Only recently has another critical benefit of wetlands emerged: their potential for carbon sequestration. Research suggests that ‘blue’ (coastal ecosystems) and ‘teal’ (land-based wetlands) could be super-sequesters, and the benefits are being seen for stormwater treatment wetlands too, despite the carbon sunk into their construction.

We’ve taken a look at the possible potential – and estimated that the stormwater treatment wetlands that have already been constructed across the Melbourne region could be sequestering more than 1,750 tonnes of carbon annually, the equivalent of taking up to 480 cars off the road. 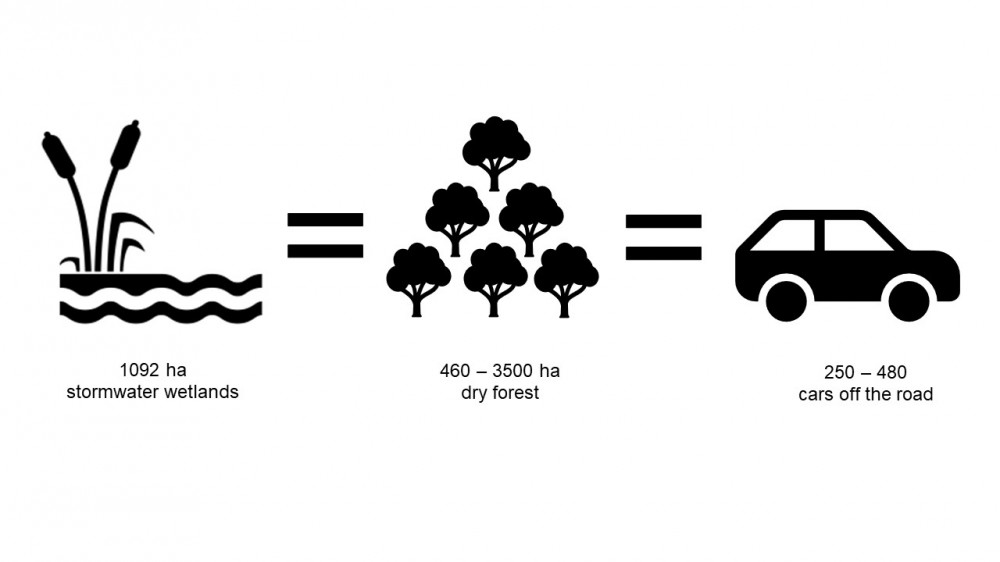 Is planting more trees the only way to sequester carbon?

Trees have long been recognised for their role in carbon storage in the fight against climate change. Through draw-down of atmospheric CO2, plants mitigate the effects of climate change by sequestering carbon within their tissues and surrounding soils. Around 35 – 65% of a tree’s dry mass is composed of carbon [1], where it may remain in the form of biomass (live/dead) or stored in soil for many thousands of years. Carbon stored in natural terrestrial ecosystems is commonly termed “green carbon”. Of total green carbon stores worldwide, forests are believed to be the largest (~27% total green carbon storage), followed by tropical savannas and grasslands (~23%) and croplands (~10%) [2]. Forests are thought to store ~862 gigatons of carbon worldwide [3], stashing away 7.6 gigatons annually [4] – the equivalent of removing ~30% of our planet’s fossil fuel emissions every year [3]. In Australia, it was estimated that a total of 13,067 million tonnes of carbon was held in terrestrial forests and wood products between 2010-2011, 98% of which was stored in living biomass [5]. It’s no surprise that, in recent decades, governments around the world have undertaken extensive tree planting campaigns in a bid to offset greenhouse gas emissions. China, for example, has planted more than 66 billion trees over the past ~40 years [6].

While terrestrial biomes provide immense carbon capture and essential biodiversity benefits, they are not always the most reliable of carbon sinks. This is because most of their carbon is sequestered above ground (e.g. in trunks, branches etc.) where it is more vulnerable to degradation and release back into the atmosphere. Flash back to last year when we all watched in alarm as uncontrolled fires engulfed huge swathes of the Amazon Rainforest, ejecting millions of tonnes of carbon into the atmosphere. By July this year, ongoing burning had turned the Amazon from a carbon sink into a carbon source, which now sadly emits more CO2 than it absorbs [7]. Aside from fires, hardwood logging and land clearing constitute major threats to green carbon stores worldwide. In Australia, intensifying bushfire regimes, ongoing deforestation for cattle pasture, and logging of native forests remain major issues for green carbon storage [8]. There is an increasing need to find alternative, reliable solutions to address the rapidly looming climate crisis while simultaneously providing the biodiversity and community benefits of forest ecosystems.

Blue and teal carbon: new kids on the block

In relatively recent years, the concepts of “blue” and “teal” carbon have emerged. Blue carbon is the carbon stored in coastal and marine ecosystems. Coastal wetlands, including seagrass meadows, mangroves and tidal marshes, are major blue carbon ecosystems and are often termed “blue forests”. In a similar vein, teal carbon is the carbon stored in inland freshwater wetlands. Compared to green carbon, blue and teal carbon ecosystems are at reduced risk of degradation processes like fire and logging, and facilitate higher rates of carbon capture. Consequently, blue and teal carbon ecosystems are now thought to have inherently enhanced potential for more rapid, reliable long-term carbon storage. In particular, coastal wetlands are considered to be the world’s most secure and reliable carbon sinks [9]. Through the natural process of biosequestration, blue carbon ecosystems capture carbon at 30 – 50 times the rate of terrestrial forest ecosystems [9]. This carbon is subsequently locked away within below-ground sediments for massive timescales – often millennia. Although less work has been undertaken to quantify the carbon storage benefits of inland freshwater wetlands, preliminary research suggests that they contain 20% – 30% of the global soil carbon pool despite occupying just 7% of the land surface [10].  This is all notwithstanding that blue and teal carbon ecosystems are core biodiversity hotspots and support a range of ecosystem services such as ecotourism revenues, amenity and liveability value, fishery support and protection against coastal erosion and extreme weather events [9]. Unfortunately, more than 65% of the world's coastal wetlands and 87% of inland wetlands have been destroyed [9,10]. Given this, there is a strong case for protecting, regenerating and, where possible, constructing new wetlands to mitigate contributions to climate change.

While often not driven by carbon sequestration, significant gains are being made through the construction of stormwater treatment wetlands and the rehabilitation of natural wetlands. On last count, E2Designlab staff have designed over 120 wetland systems. These projects have largely focused on delivering improved water quality, reduced flooding, urban greening, biodiversity and amenity benefits. Some examples of these projects are pictured. 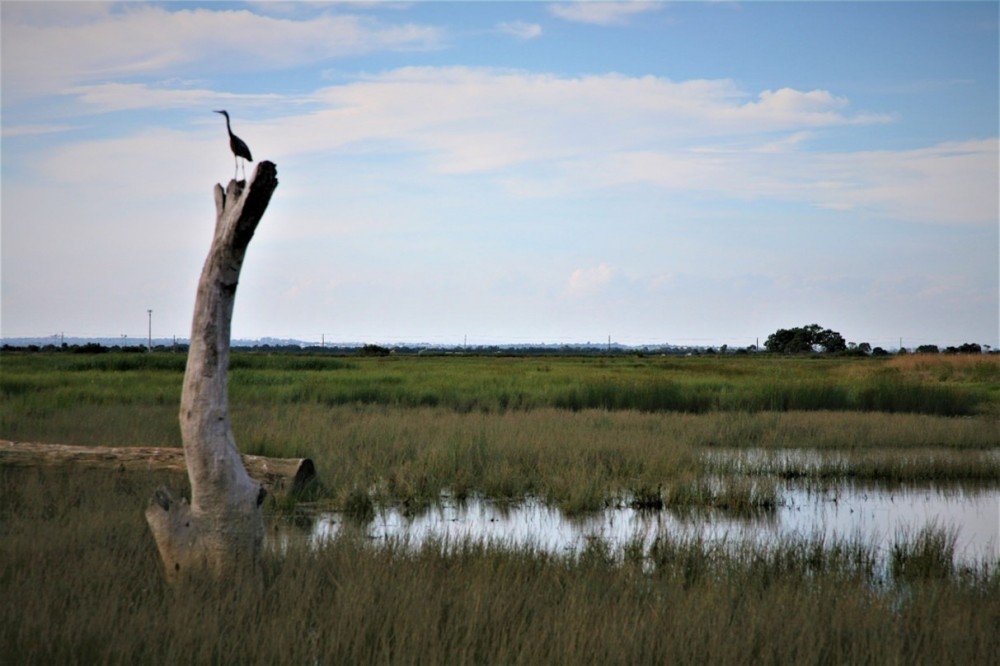 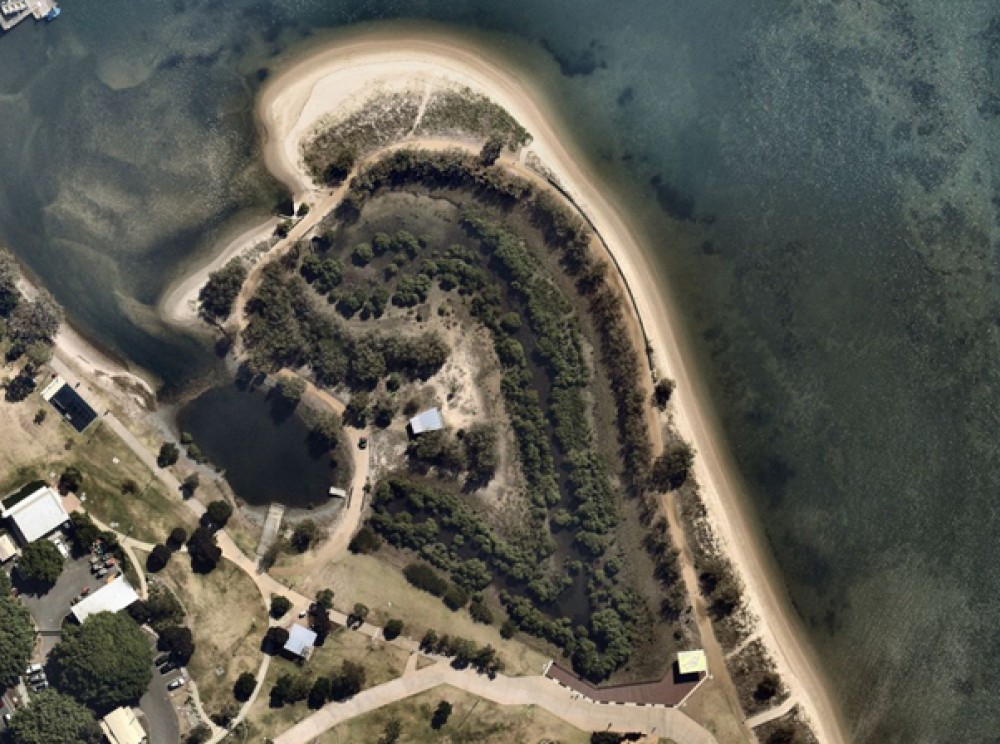 This constructed mangrove and saltmarsh wetland at the Southport Broadwater Parklands (City of Gold Coast) to treat runoff before discharging into the ocean.

While there isn’t measured data available on the carbon sequestration of these wetlands, research tells us it could be highly significant. A preliminary study revealed that stormwater treatment wetlands had the highest net carbon storage potential of a range of IWM assets and grassed surface types, storing ~1.9 kg net carbon/m2 surface area [11]. This was when both sequestration potential and emissions released through construction/maintenance were considered. Stormwater wetlands were moreover estimated to store between ~84 – 160 grams of carbon/m2 of surface area annually, with plant biomass contributing ~75% of this [12].

When these rates were applied in some basic rule-of-thumb calculations, the estimated 1,092 hectares [13] of constructed stormwater wetlands across Melbourne could be storing roughly 920 – 1,750 tonnes of carbon per year. That’s equivalent to the annual carbon sequestered by ~460 – 3500 hectares of Australian dry forest (assuming no disturbances) [14], or taking ~250 – 480 cars off the road for a year [15]. Considering that alternative wetland carbon storage estimates in Victoria are as high as 693 grams of carbon/m2 surface area/year [16], teal carbon stored in Melbourne’s stormwater wetlands might be 4 – 8x higher than the above estimate. This does not include carbon sequestered by natural inland wetlands, of which Victoria has >614,000 hectares [16]. These alone are predicted to sequester a further 3,117,682 tonnes of carbon annually, or the emissions of ~842,617 cars per year [16].

In summary, the evidence suggests that blue and teal carbon capture should be additional drivers for wetland preservation, rehabilitation and construction. There is immense scope for optimisation of constructed wetlands and other green IWM assets for maximising carbon sequestration in addition to water-related benefits. At E2Designlab we are excited about this prospect and hope to consider blue and teal carbon in future works – watch this space!

[8] Cox, L. (2021). Australia the only developed nation on world list of deforestation hotspots. The Guardian. https://www.theguardian.com/environment/2021/jan/13/australia-the-only-developed-nation-on-world-list-of-deforestation-hotspots