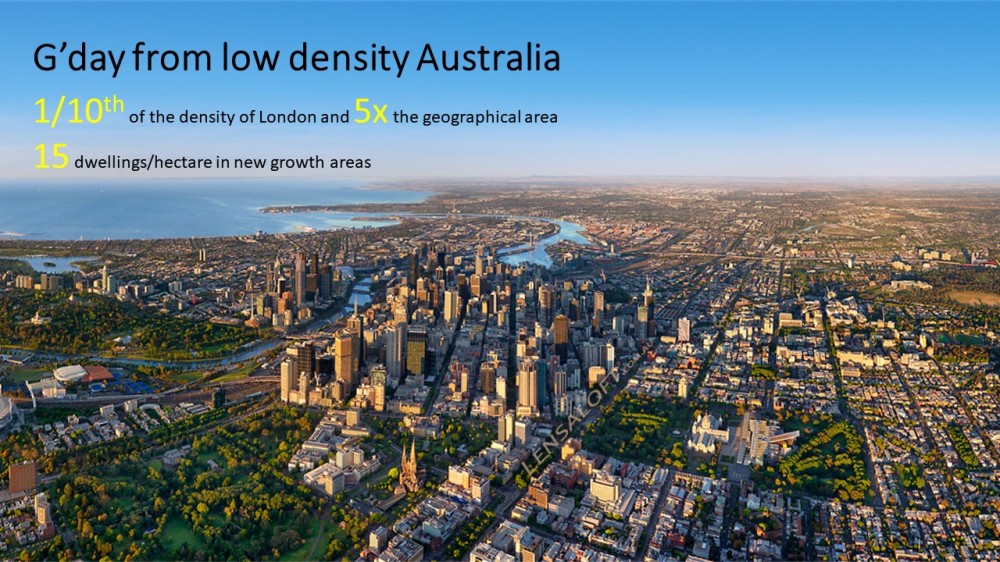 Don't get me wrong, I'm not a big fan of urban sprawl and its many many disadvantages...ecological degradation, loss of agricultural land and appalling commute times for those on the edge. But on a world stage, lower density suburbia is shining bright during this COVID 19 lockdown.

And so it should. After all, we have a pandemic to thank for the advent of the suburb. The Spanish Flu Pandemic in 1918 was one of the drivers for the roll out of suburbia in Australia and elsewhere - enabling an escape from overcrowding and the risk of disease. In fact, one of the headline selling points for the design of sprawling Los Angeles at the turn of the 20th century was the consolation that even if the husband had to drive into the city for work and risk contagion, at least the wife and kids were safe in the suburbs where they could exercise and grow food.

In these lockdown conditions it becomes obvious that space is a privilege, and Australians are generally a very privileged society. But this crisis will make social divides even more extreme. Those who can afford to have private outdoor space, and even an extra space in the house which can become an office space will be comparatively better off. Those living in apartments, shared accommodation, or worse still without any accommodation are doing it tough. Homes that are ok as a 'place to sleep' in our busy lifestyles are no longer bearable when we live in them 24/7. 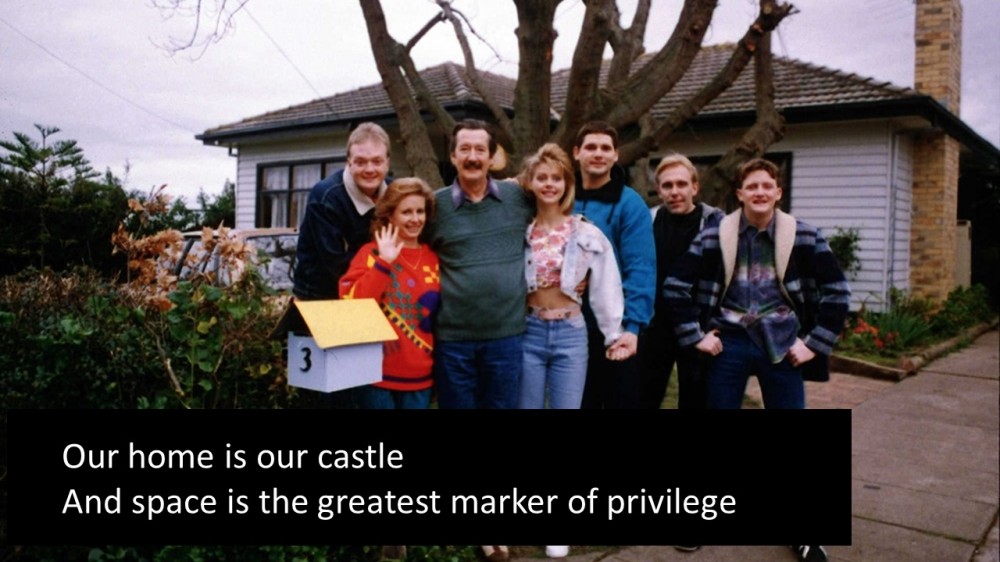 Never before have I had such appreciation for space, particularly of the green kind. While we are locking down to reduce health risk, there is another health crisis lurking in the background - a mental health catastrophe. Access to green - whether that's a park down the road or a green view from your window will be an effective vaccine for communities. And in years to come when we look back on this, I'm sure those who have more space and access to nature will have fared better.

The evidence for how green landscapes can benefit the health and wellbeing of communities is well-known. A recent study goes further and has shown that children that have more exposure to green space in their childhood have better mental health resilience as adults. I hope that this crisis will remind us how important it is to build green infrastructure into our cities as essential infrastructure. Making space for trees, providing them with water, and converting paved space to green space wherever possible. 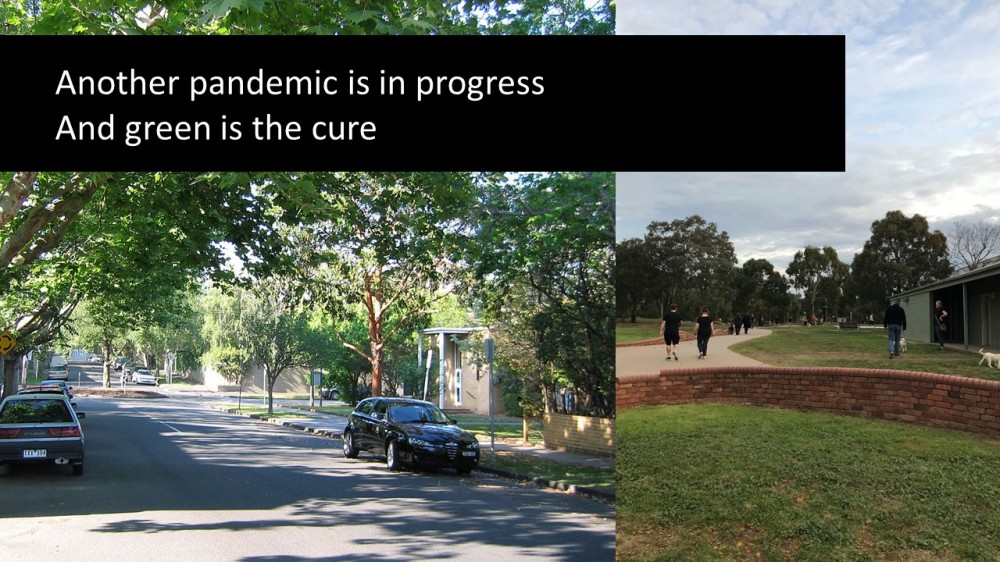 So how will this experience influence how we plan and design our cities?

Well every technophobe now knows what Zoom is. And companies are quickly adapting to the virtual working world. Despite a few hiccups, I get the feeling people are getting used to this 'flexible working' game now. Something that until now has been a bit of an 'on-trend' idea that companies liked to promote but was probably frowned upon a lot of the time. If this becomes business-as-usual, the implications for city design could be massive. Especially in a city like Melbourne where the CBD is such a central focus for transport and office space. All roads lead to the CBD. If companies decide to give up their city pad in the crisis, and see no reason to return when its over, the focus could switch to where we live instead of where we work. 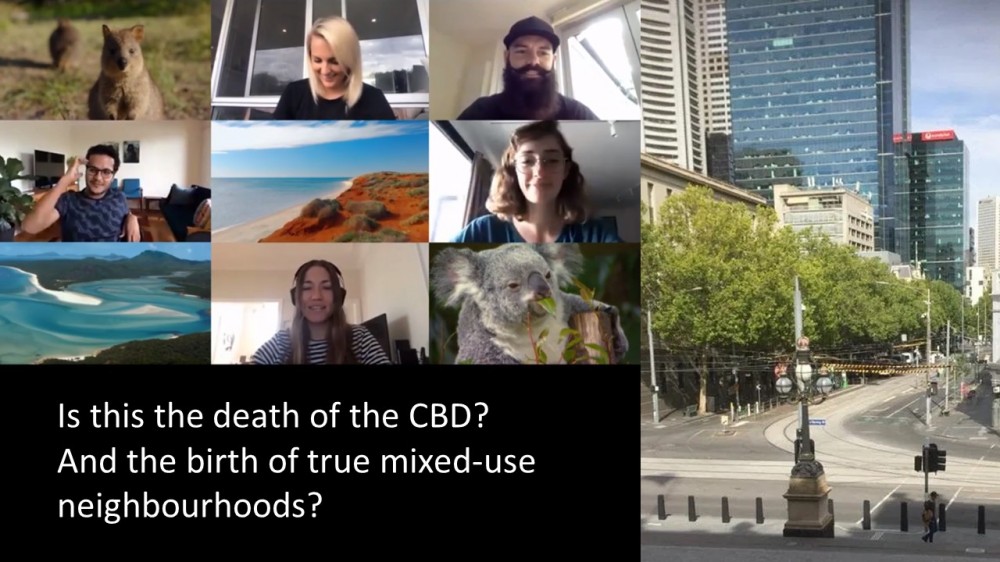 So if the neighbourhood is no longer a residential dormitory, and is now the centrepiece for work and leisure, neighbourhood planning will come to the fore. The concepts of mixed use planning and the '15 minute' walkable neighbourhood aren't new, but they are often poorly implemented. This focus on the success of the neighbourhood could be a really exciting reason to re-think the places we live. Indeed, the current situation is a 'pressure cooker' for neighbourhoods - it will quickly become apparent which work and which don't.

This re-think could include both buildings, public space and the boundaries in between. We have already seen event spaces being reused as hospitals, but this concept of adaptable buildings could extend to the suburbs - reconfiguring unused buildings to provide community services or work spaces. Public spaces could also be transformed to create what we need more of, green space. And roads, the biggest public space of all, could become highly underutilised if people start to work from home or locally more permanently. I've already witnessed my community reclaiming the roads, with pedestrians casually walking along the centre, because there is no traffic, and because its better for social distancing. So imagine what amazing green corridors local roads could become if even some of their width was transformed? 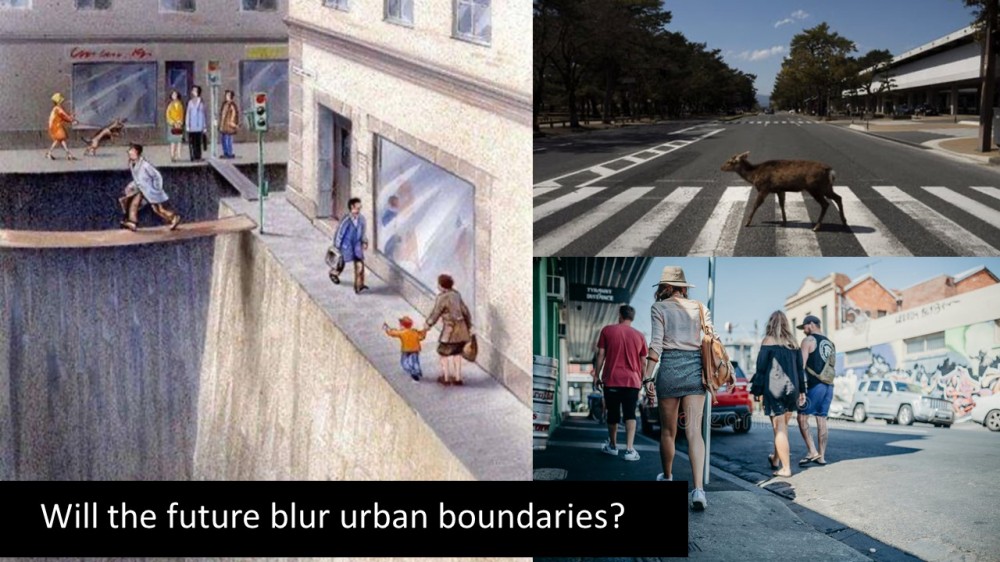 Boundaries are also being blurred. I've witnessed a resurgence of the 'front yard' - a generally disused space, but one which is now a sought after hangout which is safe yet connected, private yet social. Boundaries between 'nature' and 'cities' are also blurring, with cities around the world witnessing animals in urban centres, welcomed in by the quiet. This temporary blurring of boundaries might allow us to question why we put the boundaries there in the first place.

Perhaps the most exciting opportunity for this focus on the local could be a greater move towards self-sufficiency. We've already seen people panic buying seeds and plants from Bunnings to cultivate gardens. Growing food locally would put suburbia to good use, helping to green our private spaces, enhance our health and save money. Even before COVID 19 we were seeing a strong move towards community independence and an emerging 'distrust' of governments, authority and centralised services. This crisis may just reinforce that 'uber-localism'. In environmental terms, that could be a really exciting opportunity for decentralised water management, energy generation and food production. 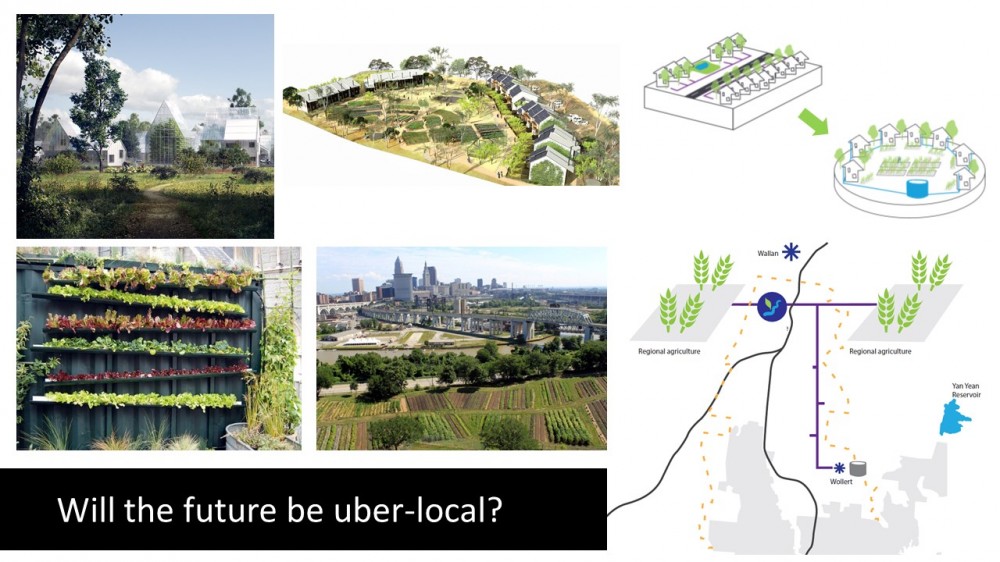 In the midst of a terrible health and economic crisis, there is hope of some positive drivers for the places we live in - and perhaps a reflection that we are are indeed the lucky country. Lucky suburbia.