In recent times we’ve spoken a lot about greening, cooling and passive irrigation at a streetscape level.  If you geek-out on living infrastructure like us, you may also be thinking “Great, fantastic!  Now how can we make this bigger and better?”.  Indeed, the same principles can be applied at a landscape level, and in no better way than channel naturalisation.

For centuries the focus of water engineering has been directly aimed at dehydrating our landscape.  Denying water of the ability to slowly infiltrate into the ground, preventing recharge of aquifers and deep soil moisture stores and in the process denying vegetation of what it needs to thrive.  In the process we set the stage for making many of our urban areas increasingly inhospitable in a warming planet.  No example of this is more striking than the process of turning living waterways into concrete channels, denying waterways of their vertical connectivity with groundwater stores and causing our precious fresh water to rush straight out to sea.

In 2016 I was lucky enough to lead a journey of naturalisation of 1.6km of Small Creek in Ipswich, Queensland.  Aerial imagery from the 1940’s tells us that this waterway was once a chain of ponds.  As ‘progress’ came to Ipswich, it was concreted over the course of the 1970’s and 1980’s.  Beginning with a co-design process with project partners Bligh Tanner and Landscapology, the first two stages were naturalised between 2017 and 2018.  The journey and the lessons learnt have recently been captured in a case study. 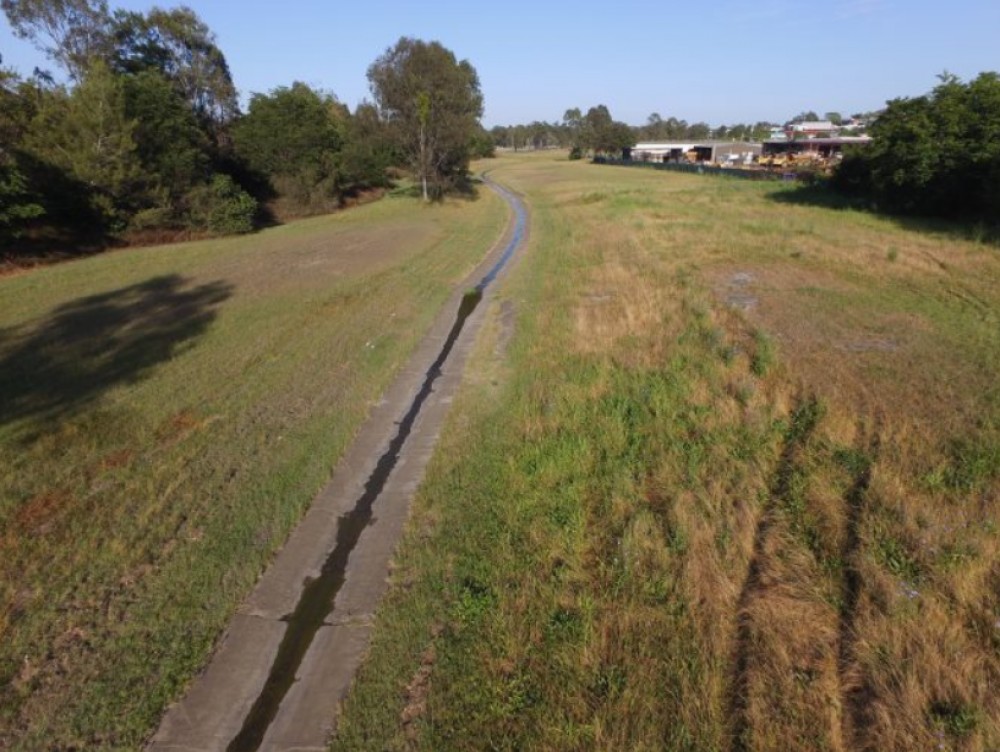 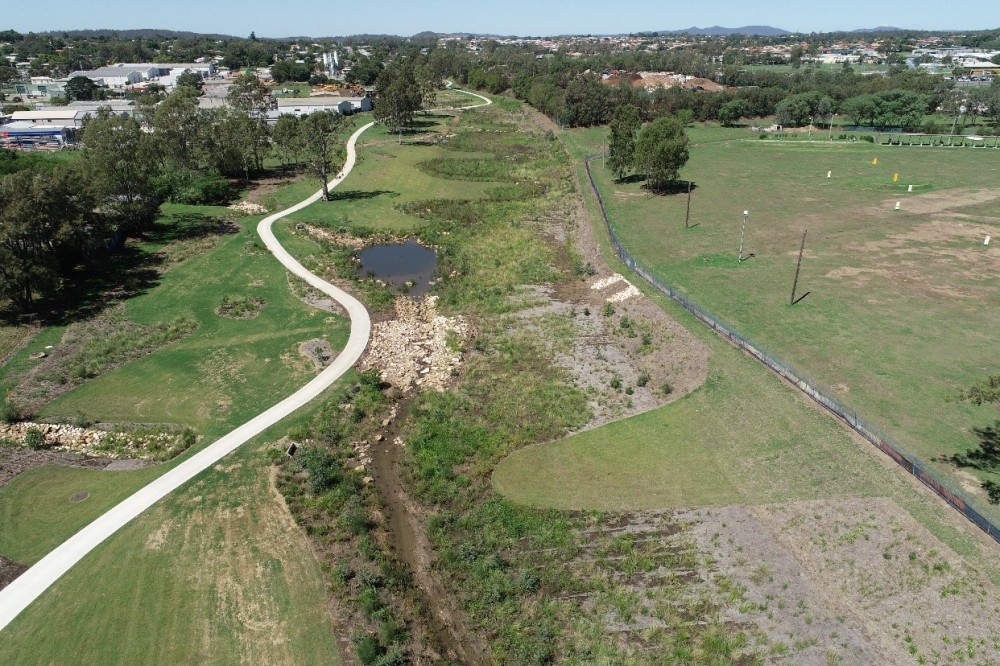 2019 was the hottest, driest year on record at the Amberley weather station, just outside of Ipswich.  And if you know Ipswich, that’s saying something.  The average maximum temperature for 2019 was 29.3 degrees, whilst November and December offered up average maximums of 33.9 and 34.6 degrees respectively.  Over the course of the year only 335mm of rain fell.  To put this in perspective the long-term average is 855mm.  So it is fair to say I wasn’t expecting to see much of a change to Small Creek when I visited the naturalized sections in early January from when I had last visited in mid-Spring.  I was pleasantly surprised to see that it had exploded into life.  The changes we had been promising for three years were coming to fruition, and the change over this driest of summers with barely more than a few mm of rain falling was staggering. 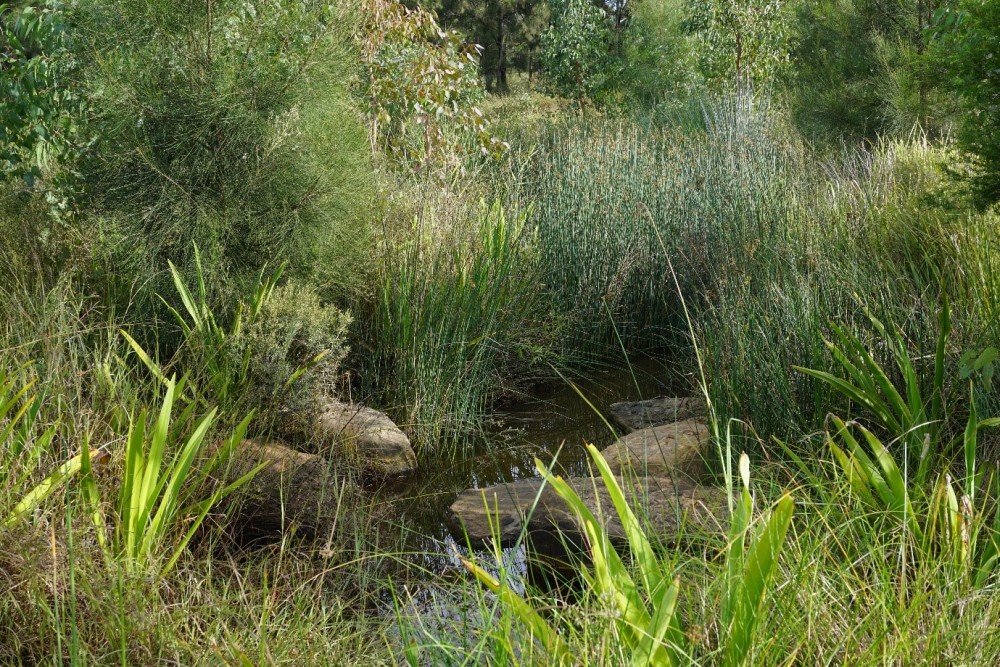 The trees that are in their second or third growing season have grown exponentially with many exceeding 4 to 5+ metres, despite the dry.  No longer is the acoustic environment dominated by traffic from the nearby road or the surrounding industrial uses, instead it was the sound of water running over rocks, the sound of birds and the wind in the trees.  The ground is no longer a sticky clay that threatens to steal your boots.  It’s moist and springy, a result of an abundance of roots from grasses, rushes, sedges and trees and returning microbial activity.  Schools of fish, dragonflies or birds periodically break the surface of the ponds (fish surveys have indicated a great abundance of predominantly native fish).  The vegetation is no longer well-manicured, it is dense and messy.  But when it comes to healthy creeks “mess is best”.   People can be seen walking or riding along Small Creek’s pathways for exercise, and children (including the young at heart!) are invariably drawn to play in the riffle sequences.

Life is indeed returning to Small Creek after a four-decade hiatus.  This transformation, over what can only be described as a hideous early summer, speaks to the power of passive irrigation at a landscape scale.  It is a demonstration of the resilience that can be provided to vegetation in extremely dry and hot weather when stormwater is treated as a resource.  It is a demonstration that when we allow creeks to be creeks, it can be transformational.

We are thrilled to have some great naturalization projects in the pipeline (or should I say out of the pipeline??? Sorry dad-joke). We have teamed up with Alluvium and Cusp to continue the design of Small Creek Stage 3.  We are also continuing our work on the naturalisation of Moonee Ponds Creek with REALM, where we have helped to build the business case by providing a benefit-cost-analysis using the CRC for Water Sensitive Cities INFFEWS tool, allowing us to quantify what has previously been considered unquantifiable or intangible.  Let’s just say it more than stacks up!  The benefits of naturalisation are now readily apparent.  The role of stormwater engineer is becoming more a case of ecosystem engineer, with scientists playing an increasing role as we look to nature for our cues for design.   Naturalisation is sure to feature more heavily as part of contemporary stormwater management in the coming years, and we can’t wait to be a part of it!